On the Road to the 92nd Oscars: The Animated Feature Film Nominees 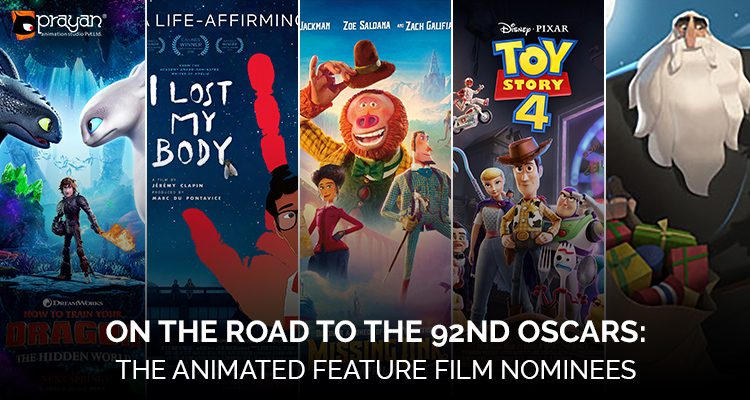 Presented by AMPAS, that is the Academy of Motion Picture Arts and Sciences, the 92nd Academy Awards ceremony (92nd Oscars) will honor the best films of 2019 on the 9th of February and will take place at the Dolby Theatre in Hollywood, Los Angeles, California. Nominated for the best-animated feature film is Toy story 4, Missing link, I lost my body, How to train your dragon and Klaus.

How To Train Your Dragon And The Hidden World

All seems well on the island of Berk as Vikings and dragons live together in peace and harmony. Now a Viking leader, Hiccup finds himself increasingly attracted to Astrid, while his beloved dragon Toothless meets an enchanting creature who captures his eye. When the evil Grimmel launches a devious plan to wipe out all the dragons, Hiccup must unite both clans to find Caldera, a hidden land that holds the key to saving Toothless and his flying friends.

How to train your dragon– the hidden world is an incredible finale of the film franchise and a moving farewell to these amazing humans and dragons. Since 2010 we have watched the young characters grow and still remain joyously funny. The finale added mature notes on their friendship bringing in more complex themes than before making the conclusion truly satisfying yet bittersweet which for me deserves an Oscar.

Tired of living a solitary life in the Pacific Northwest, Mr Link, who is 8 feet tall and covered in fur, recruits fearless explorer Sir Lionel Frost to guide him on a journey to find his long-lost relatives in the fabled valley of Shangri-La. Along with adventurer Adelina Fortnight, the trio encounters their fair share of peril as they travel to the far reaches of the world. Through it all, they learn that sometimes one can find a family in the places one least expects.

The fifth feature from stop-motion animation studio Laika, producers of The two strings, caroline and Kubo, –missing link,  is a facetious,  quick-witted dismantling of British colonialism. The film has an all-star voice cast which includes Zöe Saldana, Zach Galifianakis Hugh Jackman, who seem to have great vocal chemistry together and bring out an amazing performance. While the story is fairly simple, it’s quite captivating to kids for its relativity with a master class execution in children’s film making.

Woody, Buzz Lightyear and the rest of the gang embark on a road trip with Bonnie and a new toy named Forky. The adventurous journey turns into an unexpected reunion as Woody’s slight detour leads him to his long-lost friend Bo Peep. As Woody and Bo discuss the old days, they soon start to realize that they’re worlds apart when it comes to what they want from life as a toy.

Toy Story 4 might be a repeat of earlier ideas and plotlines but comparing it to the fourth films in other franchises, this film by Pixar is quite charming, amusing and In a whole different league. With separation and loss as the key themes all throughout the sequel, toy story 4 still remains funny, inventive, clever and a richly endearing film which just shows its strength.

After proving himself to be the worst postman at the academy, a postman is posted to a frozen town in the North where he discovers Santa Claus is hiding out.

Klaus, a holiday movie with roots in bridge building, friendship and the dying art of writing letters sure did entertain and amuse viewers all thanks to the expressive voice cast and its impressive animation. Yes, there are some truly weird characters, references to alcohol, rude humor, mean names and even a questionable amount of animated brutality but these things have been used to illustrate the importance of kindness and how powerful selfishness can be which are great lessons. It may not be a movie that you would want your children to see but it definitely has the potential to initiate some positive conversations.

I Lost My Body

A cut-off hand escapes from a dissection lab with one crucial goal: to get back to its body. As it scrambles through the pitfalls of Paris, it remembers its life with the young man it was once attached to, until they met Gabrielle.

The film I lost my body is probably one of the most original and creative animated films to ever grace the animation world. I lost my body closely examines the concept of determinism versus free will to help understand how fate affects the human condition. The film also offers a very important lesson. As humans, we tend to think that our paths in life ought to be straight from where we stand to where to want to be and forget that there are turns, twists and unexpected challenges that come with unexpected rewards. So we must be ready to follow our paths to wherever they lead. As one character Naoufel says, we run blindly and keep our fingers crossed.

Prayan Animation is all about excellence, passion, creativity, and flexibility. Over the past 7 years, we offered the best service in 2d and 3 d Animation, Infographic Animations, Children’s book & Comic Book Illustrations, TV commercials, digital production & post-production services – conceptual design, game content, cutting-edge techniques & technology for production, architectural visualizations and corporate presentations. With the best creative team, we think out of the box on every project and deliver high-quality creative outputs beyond client expectations. We are passionate about our craft and it forced us to challenge ourselves to deliver the best impression on every work.