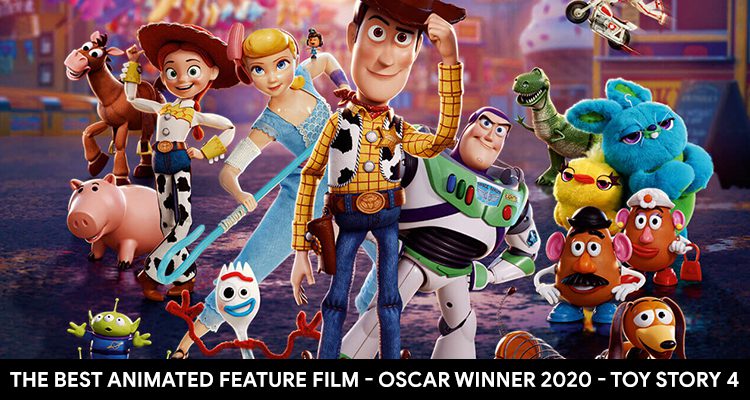 Toy Story 4, the long-awaited next chapter in the saga of Woody and Buzz, won Best Animated Feature at the Oscars held this month. Featuring the voices of Tom Hanks, Tim Allen, Annie Potts, and Tony Hale, among many others, the film sees the introduction of a new toy, Forky (Hale), who becomes lost on a road trip, prompting Woody (Hanks), Buzz Lightyear (Allen), and the rest of the team to find and save him.

The film begins with a flashback to a rainy night nine years earlier, during which Woody and a crop of Andy’s toys work to save RC from being swept away by the storm. Later that same night, Andy’s little sister, Molly, gives her porcelain Bo Peep (Annie Potts) and sheep away. Woody tries to save Bo, but she’s actually fine with being passed along to another child, so the two say goodbye. Fast-forward to the toys’ current home with rising kindergartner Bonnie (Madeleine McGraw).

Although Woody isn’t one of Bonnie’s favorite toys, she prefers Jessie, he stows away in her backpack to comfort her through school orientation, where he helps her make a special toy: a Spork with googly eyes, pipe cleaner arms, and Popsicle stick feet whom she names “Forky.” Forky unexpectedly comes to life, but, despite Woody’s explanations, he believes he’s trash and keeps trying to throw himself in the garbage. While the family is on a road trip, Forky flees, Woody follows to get him back, and the two bond as they make their way back to Bonnie. But the plan goes sideways when Woody sees Bo Peep’s lamp on display in an antique store, and Forky ends up being held hostage by 1950s baby doll Gabby Gabby (Christina Hendricks), who has designs on Woody’s vintage voice box.

Toy Story 4 is a testament to how rich those characters are. It’s a story about a guy who is afraid to be replaced. At a certain point, everyone feels that.  What the producers of Toy Story 4 did with Woody in this one, is put him in a place where he could have a second lease on life. Toy Story 4 might be a repeat of earlier ideas and plotlines but comparing it to the fourth films in other franchises, this film by Pixar is quite charming, amusing and In a whole different league. Still, on separation and loss, toy story 4 remains funny, inventive, clever and a richly endearing film which just shows its strength.

The show exceeded expectations while breaking the franchise box office record. Pixar proved there was definitely one more story to tell about Woody’s existential journey. A Story on change and growth, with Bo Peep and Forky as the catalysts. The production studio upped its animation, from the porcelain shepherdess to the complex antique shop, and delivered a bittersweet climax. This sequel definitely justified its existence. Talk about having a friend, “Toy Story 4” has become the first franchise to earn two animated film Oscars.