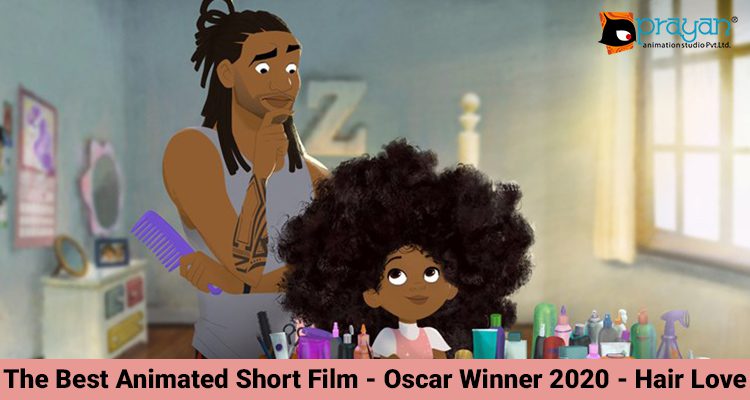 The Oscars tend to draw the most attention to the big-ticket categories but this year the winner for the best animated short movie rose to prominence. Hair love is a six-minute video that revolves around an African- American father Stephen, his daughter Zuri and her natural hair.

Directed and written by Matthew Cherry, featuring the voice of Issa Rae, Hair Love the “frontrunner” in the Best Animated Short Film category was nominated alongside Daughter, Memorable, Sister, and Kitbull. The vibrant and emotional film follows a young girl named Zuri who just wants one thing: her hair done. In the absence of a mother figure and with a head full of natural curls, she must refer to YouTube tutorials and the inexperienced hands of her father for help.

While it may seem like a simple premise, the storyline speaks volumes to the Black community. Not only was there the inspiring element of a young African American girl embracing her hair, but it offered the rare opportunity of showing a Black family depicted in animation with the father being shown in a positive light.  Despite having long locks, Stephen is unable to style his daughter’s hair which seems like something he is not used to and on this particular day before the big event, he has to figure out how.  The tasks sound simple enough but we soon come to learn that Zuri’s hair has a mind of its own.

Stephen decides to take the easy road by covering it up with a bunny but this makes the hair so angry and even leads to a fight between the two which is hilarious. After the struggle we see Stephen giving himself a chance to learn how to style Zuri’s hair by following a vlog and it turns out great. Family and illness are delicate issues, especially when they involve a mother, but this colorful video made by Matthew A. Cherry has hit the nail on the head: we can’t help anyone feel better if we neglect ourselves.

A hair tutorial, a little hairspray, and some hairpins seem like nothing, but often they are enough to remind us that, even if you can no longer recognize yourself when you look in the mirror, even if you are ashamed of that hairless head, even if you can’t understand why and accept it, your loved ones still see you. It’s not just hair; life waits for you out there, made of simple everyday things. With or without a major studio attached, the message of inclusivity and love behind the film has been constant from day one.

Even though the film features an African-American daughter and her dad, it’s a universal story. Parents everywhere can relate to it in the same way kids of all ethnicities can. It’s an important story because of representation matters. With all the conversation around the OscarsSoWhite and the much-needed demand for more diversity in Hollywood, this nomination couldn’t have a better platform to drive home the importance of representation.