Comparison Between Frozen 2 and Frozen 1 Movie 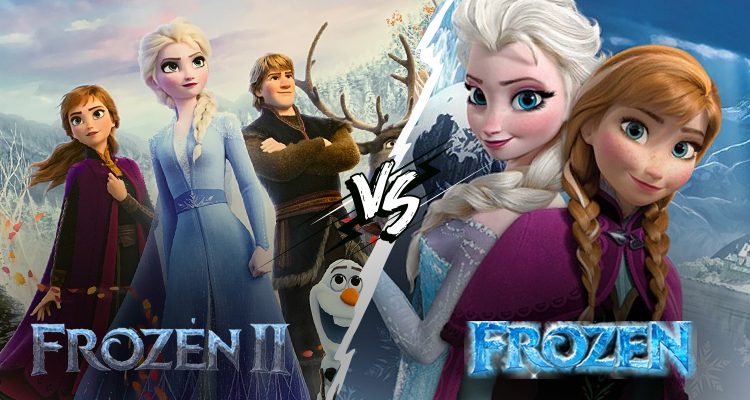 Frozen the movie is an all-time favorite for a lot of people, following through Elsa’s powerful story in search of queer identity. It was almost obvious that frozen 2 would look better than the original film and the sequel didn’t disappoint pushing boundaries in Frozen 1 even further.

The original film was absolutely stunning but it gets better in the sequel with even more stunning water bodies, ice sculptures and the major transformation that Elsa goes through giving us the opportunity to experience her powers in a more intense way. In frozen 1 we saw more of Anna’s adventure story along with kristoff, Olaf and skev which was hilarious and sweet and now we get to have a five some with Elsa included which makes the storyline even more interesting.

The sequel goes deeper into Elsa and Anna’s background in new ways and brings out heavier themes in the narrative, stronger consequences making it stronger generally than the original one. With old supporting casts such as Hans and the people of weastletown the film has introduced new characters such as Lieutenant Matthias who are just as iconic as the main characters but really don’t make any meaningful difference in the film except just helping to move the plot forward.

Every character has a new wardrobe in the new movie but Elsa comes out as a whole new person. She goes ahead and does the unthinkable, letting her hair down and her outfits are just on point. However, it’s like some people never learn and some things never change. Elsa is still stubborn as ever and would rather take on all of her challenges by herself instead of asking her friends to help and sends Anna away, again. Although Anna eventually saves her sister, we’d have expected Elsa to know better than sending her selfless sister away.

Olaf, on the other hand, is really doing the most at being hilarious in the second film like he always does. He is funny, heartwarming with great comedic relief as usual and this time his song is actually great!

The movie’s soundtrack has always been great and gives the audience a great way to connect with the act. New songs have been featured and the old famous “let it go” let go. However, the overall soundtrack in the sequel is amazing, everyone gets to shine, Kristoff finally has his own song and it’s everything you could dream of.

For a movie-friend like frozen, the audience expects to relate more with it every time it’s released leaving you craving for more. Frozen 2 didn’t exactly leave it at that as it has what would be termed as a quick ending. Things move so fast in the last few minutes which makes sense because it’s a kids movie and has to wrap up quickly but still, in my opinion, they’d have made more of the movie like in frozen 1 in the last few moments making the narrative look less cheap.