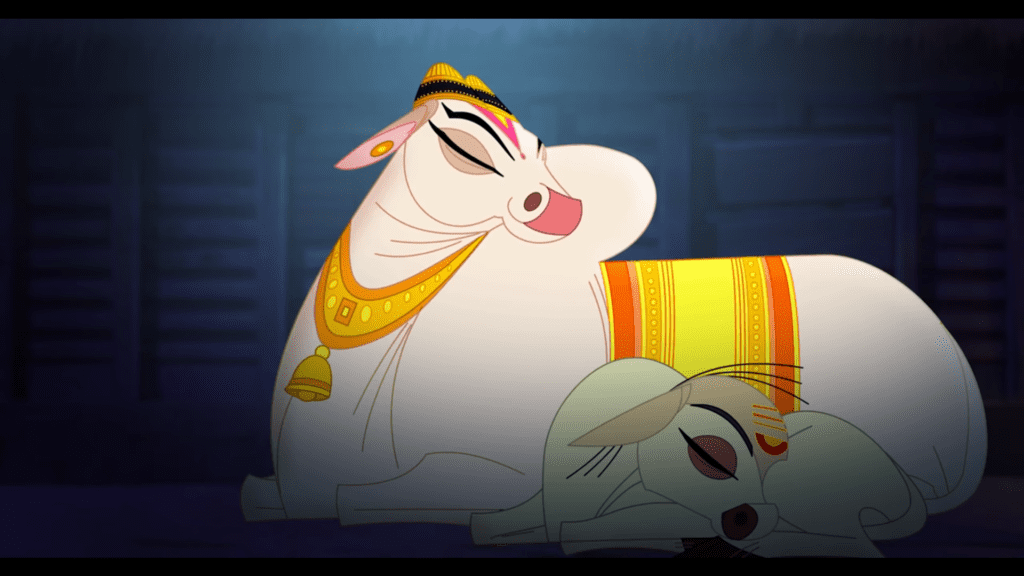 An HR professional Working at Infosys, Bengaluru, and a greenhorn in the animation field, got a spark of making a 90 minute animated film, that too in Sanskrit

His first job after graduation was as a copywriter in an ad agency and there he did the scripting for India’s first children’s animated CD rom film Panchatantra.

“I always had an urge to make my own animation film. After watching Arjun— The Warrior Prince, I told my wife that I wish to make an animation film. She always supported and with her full motivation I chose Punyakoti, the Kannada folktale, because it is a popular south Indian folk story: It gives the message of leading a life of integrity against all disparity and living in harmony with nature. There was an anti-corruption movement also going on around 2013 and hence introducing such a theme into such a scenario seems relevant for me.”

After that he started thinking why can’t he make his baby movie in Sanskrit language as there were no animation has been made in such language.

Ravi shared the idea to his friend, AV Girish, an animator and he liked it  and suggested that it’s just a concept now we need to expand it to a full length animation film .. Hence to make it a full length film he impinged his own creative story of a village facing drought where our cow and tiger came into an encounter. Hence they completed their script and visited the rector of Tamil film industry’s music world, Ilaiyaraaja. Ilaiyaraaja, for Ravi was not just a musician, there is a strong personal bond between them. He have showed almost all his earlier scripts for his review and suggestions but when he showed Punyakoti he got happy with the concept and agreed to do the music of the video free of cost.

His major concern during the start of project was actually not the animation but to find a producer. Having an idea is easy but the most challenging part is execution. Ravi, considers Steve Jobs as his role model says, “He just had this idea of iPad and went ahead. I too followed the same path.”

They approached more than 100 animators in this field and most of them felt that for a beginner like him this is a bad idea and faced rejection everywhere. During this challenging phase where they were unable to find a producer  got rejected from animators, Mohandas Pai, chairman of Manipal Global Education and former CFO of Infosys instruct them to opt for crowdfunding with Wishberry. Hence they started a target of 40 lakhs and with God’s grace they achieved it with in the time duration

It all happened by chance. During the online crowdfunding process, someone made a  comment that it will be better if  we could approach Samskrita Bharati. After that I contacted Samskrita Bharati and they invited me give a talk to the students about our project . There We met Professor Leela, with an experience of about 35 years of experience in directing Sanskrit plays.

From dialogue supervision and delivery to selecting and finalising the cast, the professor helped a lot. The characters for voice-overs are all a part of her Sanskrit drama troupe ranging between the age of 5 years (her granddaughter) to 80 years. Popular names from the Sanskrit theatre fraternity include Anupama Hosakere and Vidyashankar Hosakere, Narsimha Murthy and Anand Raja Mani among others.

According to Professor Leela: Sanskrit is both ancient and modern at the same time. The beautiful visual appeal of the animation can advance the impact of Sanskrit to a large extent.”

Some eminent names included in this success comprising of actor and national awardee Revathi and Roger Narayan from Hollywood of U-Turn fame. The national awardee film editor Manoj Kannoth ,Anwar Ali whi is a famous contemporary poet from Kerala, has written the dialogues for all the characters.

With the amount raised through crowdfunding, Ravi and his team managed to finish the animatics with dubbed dialogues by June 2016. The technical team worked and interacted on Google hangouts.

The team has not tied up with a particular studio.

They have tied up with a Pune based collaborative platform Gamedoora to drive online collaboration and project management. The digital archiving and asset management of the movie is done by a Chennai startup—CineHive.

By September 2016 the team exhausted all the funds collected and from then on they have gone ahead with personal funding sourced from friends and family.

After the trailer went viral, there is some positive development for the team.

Now some of the big banners have approached them to lend their support. Now they are hopeful that it materializes and can take Punyakoti a project close to our hearts to various film festivals and have a theatrical release too.