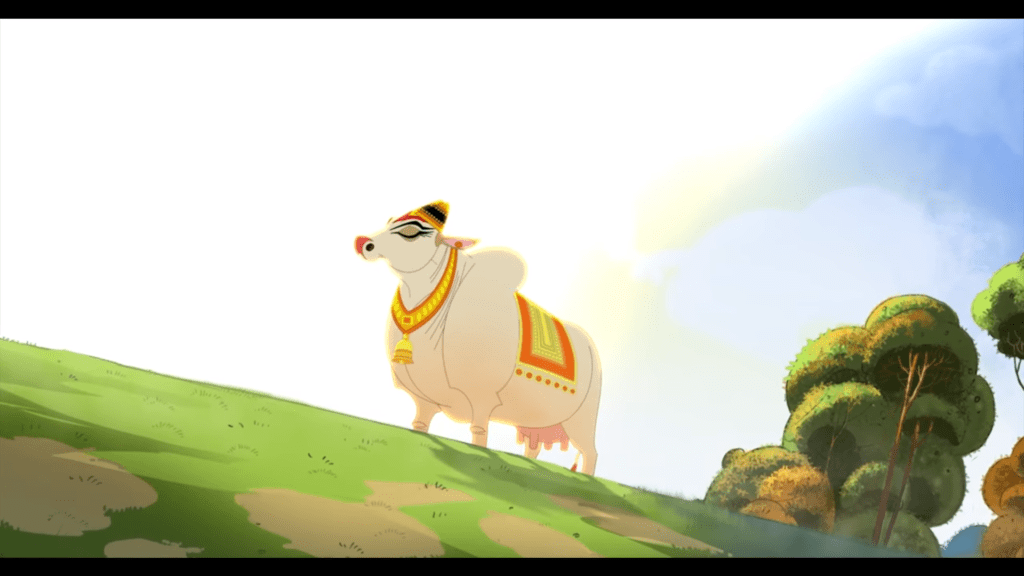 ‘Punyakoti’ a simple moving allegory: a hungry tiger comes across a cow called Punyakoti and decides to make her his feast for the day. Punyakoti convinces the hungry tiger that she will surely return to sacrifice herself as his grand feast, once she  fed her young calf waiting at home for her. Being trustworthy, she returns to be the tiger’s meal –Seems like this story took us again to the classic stories we heard in our school days the Panchatantra stories.
This story is derived from a popular Kannada folk song called Govina Haadu (The Cow’s Song), which is actually based on an episode in the Mahabharata (from the section of the Shanti Parva or “Chapter of Peace”).

PUNYAKOTI: Name of a Holy Cow

As per Indian Astrology the meaning of this name Punyakoti is a person with abundance of Confidence and Power. Here the astrological factor seems true through the success of the World’s First Ever Animation Film in Sanskrit by Mr. RAVI SHANKAR with a feather on its crown: National Award for the best animated film at the ANN Awards. 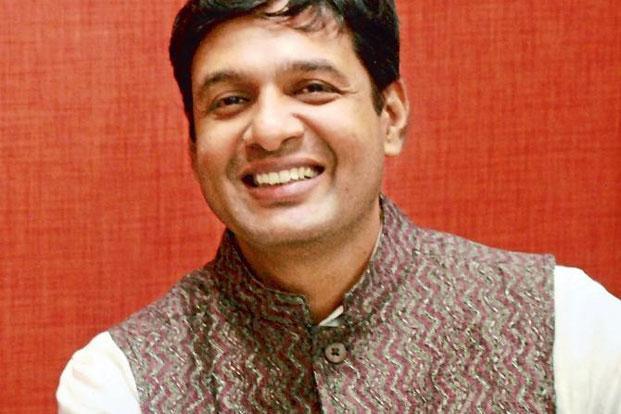 Let us hear what Punyakoti is and how it happens, directly from the creator. Our beloved Mr. Ravi Shankar.
1. You are now famous as a National Award Winner for the best-animated film Punyakoti at the ANN awards. We would like to know about you personally, Can you share something about your personal and professional life?
Professional: I started my career as a copywriter and a scriptwriter. I worked for a publication company in their Multimedia department. But after my MBA in HR, I shifted my career to process reengineering in HR and Marketing. I am an introvert. My creativity is inspiration driven. I get inspiration rarely so my output is very low.

Personal:    I live with my wife and two children in Bangalore.

2. What is meant by Punyakoti: how did you end up in such a name for your film?

Punyakoti is the name of the cow in a folksong in Karnataka. I drew inspiration from the folksong. So I picked it up from there.

3. As per my knowledge, you are an American banking professional, holding on to your hectic work cycle where did you get the spark of doing such a project and how did you manage the time?

The spark came during a bus ride to office. Managing time was very difficult. I had to sacrifice many things in my personal life to make this happen. But I have a big whiteboard in my room, where I write down all my tasks and manage them one by one.

4. What were the hurdles you passed through from the start to the end of the project?

The biggest hurdle was finding the right talent who are trustworthy. As I worked with freelancers, many took advance and never delivered. Many did not have discipline of delivering on time. I had a lot of delays. I had to make hundreds of phone calls to get things done. Funding was an issue. I did not have a producer or a investor. So I struggled a lot on that front.

5. In spite of a lot many languages we use commonly for our communication purpose like English Hindi etc. you opted for Sanskrit. We all know that Sanskrit is a less spoken language, Is there any personal reason behind the selection what’s the thought process behind such a decision?

There was a Sanskrit teacher who told me there are no popular contemporary works in Sanskrit. So I thought it will be a good idea to make it in Sanskrit. Also I thought if I make a movie in Sanskrit, no one will bother me and I will have no competition.

6. How did you do the scripting and voiceover of this project?

The original script was written in English. We then conceived the dialogues in Malayalam as it was close to Sanskrit. We then translated it to Sanskrit through Samskrita Bharati. Then we approach a Sanskrit scholar (SR Leela) who has done Sanskrit play to help with her members to deliver the dialogues.

7. You are coming from an entirely different field, what all are the challenges you faced?

As I did not know animation, there was no one to guide me. I have done explainer video scripts. So I thought it would that easy. I took advice from a lot of people and learnt about the tools that are used. After two years I could edit the raw files and even draw to convey my ideas. Then it became easy.

8. Some funny moments you had during this journey?

Many people thought I was mad and wanted to just take the money from me. benhind my back they will say that this movie will never get completed as I dont know anything about the process. They will say it is easy to cheat Ravi. Now when I look back, it looks funny.

9. In a normal sense animated videos basically aimed at children, most of the viewers will be our little champs. In such scenario what made you do such a project? What was the inspiration behind doing such a complicated project?

10. Did you have any intuition about your project, that this is gonna hit the award screen?

I had an intuition that it was unique. but when the editor and the musicians and sound engineer saw the movie, they predicted that it could win awards as the story was very well told.

It is a fledgling industry. It will take a few years for us to have the resources to compete globally. Good talent exists in pockets. We have world class tools that are the same anywhere in the world. But time and money are also essential to make world-class animations. Making a good animation project has many parts including marketing. All of them have to come together. The live-action movie industry has matured over the years and all components are coming together very well. The same will happen in animation in a few years. But a few of us have to risk it.

12. Future plans: Any new inspirational project in your mastermind ?

I have three scripts in the works. The next movie will be announced in November 2019

13. What are some of the tips and tricks you have to give to the budding talents?

Dont give up. Dont stop learning. Dont aim for perfection. Keep the company of good people. I wanted to complete this project in 2015, but it took three years more. I had fear and I became frustrated. But my friends and family helped me to cope up. There are 100s of things we could have done better in Punyakoti. So there will always be another opportunity. So keep moving.

14. Lessons you learned from this?

There are hundreds of lessons. Some I have listed in the answer above.

15. As an award winner, what is your current feeling?

I feel lucky. I am a messenger through whom good work happens and not because of me.

16. A description of your team?

Anoop Sreedharan (Animatics), Ajesh (Storyboard), Prasad (Character), Shajeer (Painting), Shibu M(Layout), Deepak Divate (Animation) Krishna (Animation) were the core team. Girish AV (Creative Head) was the leader. He sacrificed a lot to make this movie happen. Without him we would not have completed this project. All these team members were there from the beginning to the end. There were others who worked on certain portions of the movie. The good part of the team was they were directing me than me directing them. I only shared the vision for each scene and the rest of it is their expertise.

17. Comparison between Ravi Shankar before Punyakoti and after a self-analysis?

I took risk and I have a small success. If not for this project, I would never have met the 100s of people in the daily course of life. I am thankful to god.