The Difference between Game and Feature Animation 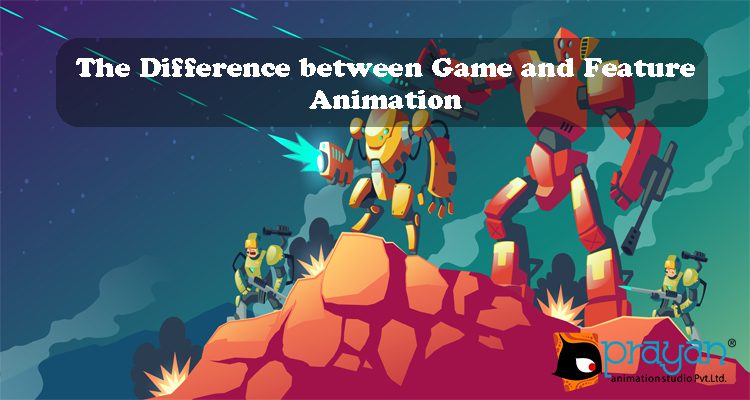 Video game animators must create perfect animations that will look great from 360 degrees. In video games, if the player decides to turn around, he/she will not see the director with cameras. In movie animations, the designer focuses on the camera view or 2D animation  and will ignore everything else that the camera does not capture.

Since movies are meant for viewing and not interacting with them, the inherent programming is usually oriented towards generating visible results without the input of the user. Therefore, the models do not have to react to stimuli because they are not reacting to anything. When it comes to video games, all actions are controlled by the user. This means that motion sequences should be programmed as a response to single or combined buttons and the beings or objects in the environment are programmed to be sensitive to the actions of the user.

Sound use and sound quality

In movies, speech and different sound effects are crucial for a successful animation video. Since movies are not rendered frame-by-frame, there is no need for designers to cut corners on their audio. Video games avoid the use of sound and instead opt for musical backdrops in the repeating MIDI or WAV format because of the real-time rendering constraints. Adding voices to game characters puts a lot of strain on the rendering output engines and extremely slows down the game, further making it less enjoyable.

Video game animations must focus on small cycles in short time frames and they must blend. This is unlike movies that have choreographed fight scenes. In games, the players will decide when to slide, jump, kick, reload, run, and do other things. Therefore, the small animated cycles that last a few seconds must be put together to create an enjoyable and complete animation experience for the player or user.

A variety of Artificial Intelligence (AI) engines have been developed in most gaming environments to assist in controlling in-game character behavior and make them smarter. This is because video game models tend to be more alive when compared to movie models since they react to stimuli in different ways and they are able to learn and even store past behaviors in the video game’s memory. Movie models do not need artificial intelligence engines because they are just enacting a script that is controlled by animators.

As you can see, creating animations for movies is very different from creating video games animations. Although the same principles and tools are used in both mediums, the techniques and processes greatly differ between the two. The difference is mainly because video games are meant to be interactive while movies are meant for viewing.

Reference blog: How important is drawing in animation? A detailed Survey